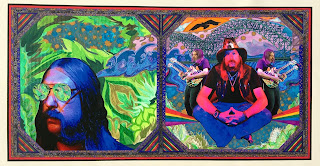 Surfing atop a furious beat, “The Sound of Revolution” epically washes ashore on a wave of prog-rock spiked with a string section and hints of R.E.M..  Parker then takes us to church in the Mississippi delta for a swampy delivery of gospel standard “Jesus is on the Main Line”.  With vocals drenched in blues, he gives a breathtaking slide guitar performance.  “Indian Dream / 1 Way 2 Fly” is a most interesting display of musical duality as the selection abruptly transitions from a soft Indian-inspired instrumental into an explosion of power-punk-pop.  Complete with crunchy guitar, catchy hook, and a smoking bridge, it definitely rocks.  “More Than Love” is a brilliant nod to the legendary Stax catalog, boasting a funky groove, soulful vocals, and blasts of brass.  And I adore his cover of Al Green’s “I’m a Ram”.  It’s loaded to the brim in a groovy and funky stink.  Parker pays homage to the great Duane Allman on “Skydog”.  I love the Allman Brothers vibe he injects into it as he pours out this flawless performance.  The River’s Invitation comes to a magnificent end of its twenty-four track journey with a fistful of funk, Hendrix-y psych-blues guitar, and full-bodied organ with “And the Song Goes on Forever”.  It’s quite the amazing listen.
Since reading Robert Gorden’s book It Came From Memphis and listening to the companion soundtracks, I’ve become obsessed with the song “I’m A Ram”.  Although originally recorded by Al Green, the version appearing on the soundtrack was performed by Memphis band Big Ass Truck.  After going through a rabbit hole of sorts, I had even created a Spotify playlist consisting of every version of “I’m a Ram” I could find.   Within a week, I received a CD for review from a blues-rock band called Head Honchos,  which also contained a cover of the song.  I took that a sign to take a closer look at that album.  It ended up being one of my favorite albums I had heard so far this year.
When I noticed the song was listed on the track-list to this album, I took it as another sign,  I was hooked on this album from the beginning.  I’ll be keeping an eye out for Robert’s version of the song to show up on Spotify.  When it does, it will definitely be added to the playlist.
For more information about the artist, visit this website  : robertallenparker.com
Posted by PhillyCheezeBlues at 4:23 PM