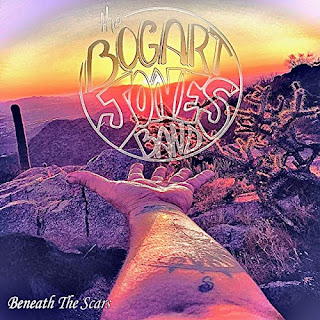 Hailing from the heartland of Illinois, in Canton, The Bogart Jones Band has managed to sweep me off my feet with their new album, Beneath the Scars.  This second full-length release for the six-piece band, is rich in melody and lyrically masterful.  Basking in that sweet-spot between funky jam bands and southern rock, their all-original music is a patchwork of rock, jazz, blues, country, and soul.  It fits in very well alongside that of The Allman Brothers and Widespread Panic.  The Bogart Jones Band is comprised of Wes Simmons (lead vocals and bass), Ryan Rose and Don Mabus (guitars and vocals), Tim Fiers (drums), Curt Caudill (keyboards and vocals), and Ty Bailey (percussion).

A driving riff and funky beat roll out the red carpet for the riveting coming of age song “Tainted Youth” to get the album going.  I love the big sound, the hot guitar licks, and the wave of hold-steady chords off the organ.  Maintaining the high level of energy which they began with, they keep pushing forward in a huge Allman Brothers’ take-no-prisoner way on “The Word” in which the message is love.  A slow intoxicating groove, and Simmons’ deep slightly raspy vocals puts “Someone to Love” at the top of the list of favorites.  “Dear John” a touching, melancholy, and beautifully melodic farewell letter is another standout performance.  The pace is a fast and funky one on “It’ll Do” with Candill invoking a fascinating Zappa-esque energy into his solo.  The album closes in a full-fledged country-funk fashion on “Life’s a Bitch” filled with a ferocious beat, searing electric guitars, hot bassline, and barrelhouse piano.  It’s bodacious and sounds great.

I’m definitely keeping my eyes peeled for upcoming releases from The Bogart Jones Band.  These guys are terrific!

For more information about the artist, visit their Facebook page: https://www.facebook.com/thebogartjonesband

Take a listen to the album on Bandcamp,

If you prefer Amazon music, you can click on the link below to purchase this terrific album from the PhillyCheeze Amazon Store.  As an Amazon Associate, I earn from qualifying purchases.

Posted by PhillyCheezeBlues at 3:11 PM