Paul Thorn - “What the Hell is Goin On?” 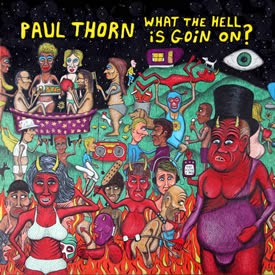 What the Hell is Goin On? indeed!  This twelve song follow up album to his 2010 release, Pimps and Preachers, is composed entirely of cover songs.  This is not your typical cover album though, as they are mostly all rather deep cuts.  I have to admit though, while tapping into topics such as love, infidelity, broken relationships, revenge and loneliness, they all fit in Thorn’s wheelhouse quite comfortably.

From the 1973 Buckingham Nicks album, “Don’t Let Me Down Again” was approached by Thorn in a more countrified manner with a slower tempo than the original, thus allowing the riff to really soak in and take hold.  This I really liked.  I still kind of missed Stevie Nicks on vocals though.   Although I appreciate and enjoy the Thorn’s rendition of Buddy Miller’s ‘Shelter Me Lord’, I prefer the original version a little better.  This one is somewhat of a contemporary gospel song to be sung with catastrophic events in mind. Background vocals provided by the McCrary Sisters along with the organ accompaniment by Michael Graham give Thorn’s version a little boost of “church” that interestingly blends in with some nice swampy slide work by Bill Hinds.

Thorn journeys to unusual places to find love and retribution. This is one my favorite traits of his.  Whether he’s writing the song, or choosing one to cover he doesn’t take the heavily traveled path.  Take his cover of Ray Wylie Hubbard’s ‘Snake Farm’.  The music is heavy on the slide, with a little echo to set an eerie tone.  The song itself is country-quirk.  It’s a song of affection about a tattooed woman named Ramona, who works at the Snake Farm reptile house, likes beer and loves the UK band, The Alarm. If you listen closely to this one, you can almost hear the rattle snakes in a faint repeating sped-up drum track toward the end.

Thorn enlists Delbert McClinton to assist with vocals on his version of Wild Bill Emerson’s ‘Bull Mountain Bridge’.  This catchy song is a captivating one about a redneck Klansman, Bull Mountain Hawk who seeks retaliation on a local charismatic drug dealer, Stone Fox Dan for messing around with his woman.  Bull Mountain Hawk’s solution is simply to break his arms, throw him in the river, and if anybody asks, tell them he committed suicide.

Questioning the reason behind today’s rampant violence, the title track, ‘What the Hell is Goin On?’ from Elvin Bishop, features Bishop himself on guitar. The song is additionally fortified with Thorns energy and surpasses the original as far as I am concerned.  Thorn and Bishop make a great team.  Another artist with roots in the Sixties that Thorn chooses to cover is Paul Rogers.  Taking on “Walk in My Shadow” by Free (originally on their Tons of Sobs album), the song is flipped from its original sixties electric blues format, with its faster pace and Paul Rogers vibrato infused vocals, to a more traditional electric blues. This one turns out nice.  If you have ever lived in a small town and experienced rampant gossip and loss of privacy, you may just identify with ‘Small Town Talk’, by Rick Danko.  This track sounds very much like a Randy Newman song with Thorn’s slightly nasally voice, and the poppy organ melody.

My introduction to Paul Thorn was through his previous album, Pimps and Preachers.  I was blown away at his ability to pen a song.  And now I am aware of his super power to dive deep and find songs that deserve to be listened to again.

Posted by PhillyCheezeBlues at 11:16 PM