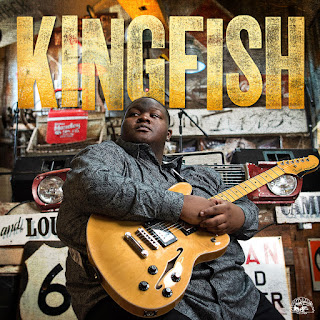 
I first heard of Christone “Kingfish” Ingram a couple of years ago, while watching a YouTube video.  I remember being amazed at his guitar prowess and being enamored by the sheer depth he plunged himself into the Blues.  Earlier this month, I was fortunate to have witnessed a live performance of this Clarksdale, Mississippi blues prodigy at Beale Street Music Festival in Memphis, Tennessee.  It was indeed a rare treat for this blues music loving soul.


Ingram’s debut album, simply titled Kingfish, has finally been released, and I’m absolutely loving it.  Produced and co-written by two-time Grammy winner Tom Hambridge, the album features notable guest performances from Buddy Guy, Keb’ Mo’, and Billy Branch.  With Kingfish holding court on vocals and guitar, and Hambridge behind the drums, the band is comprised of guitarist Rob McNelley, bassist Tommy MacDonald, and Marty Sammon on B3 organ/piano.


From the beginning, I was hooked by the dynamic groove of “Outside of This Town”.  Kingfish’s fearless delivery and robust vocals stand tall in the saddle.  Buddy Guy who has stated “Kingfish is the next explosion of blues.”, appears with Keb’ Mo’ on the delightful gem of a tune “Fresh Out”.  This track about being down and out has a cool vintage quality about it.  Sammon’s piano accompaniment is terrific.  “Before I’m Old” is another great song.  It is funky, soulful, and topped with more searing guitar.  Keb’ on this one too, as well as three other smoking tracks.  One of which is “If You Love Me”.  With Billy Branch on harp and Chris Black on drums, it’s a downright jamboree.


One of my absolute favorites on the album is, “Been Here Before”.  Kingfish plays this amazingly-reflective song on acoustic guitar and sings it with heart.  I remember being wowed and captivated by his performance of this song at Beale Street Music Festival. It really stuck with me.


Kingfish is one of those albums, every blues fan will want in their collection. It’s that damn good.


---
For more information about the artist, visit this website.. www.christonekingfishingram.com 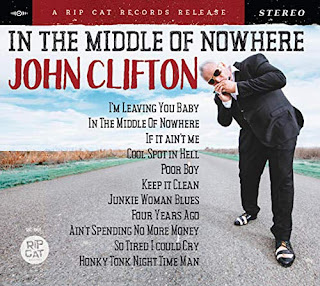 
There’s a genuine authenticity to the blues music of California singer/harmonica player John Clifton.  Whether playing one of his own terrific original songs, or tearing through one of his amazing covers, he blankets his music on In the Middle of Nowhere with a warm nostalgic vibe.  His tight-as-hell band consists of guitarist Scott Abeyta, bassist Jake Finney, drummer/percussionist Edward Fritz, and pianist Bartek Szopinski.


Clifton delivers a tasty dose of ripping harp on the instrumental original “Cool Spot in Hell”, while Szopinski hammers out an exquisite piano performance.  Another great original is “Four Years Ago”.  This instant classic, about being in the doghouse, is an undeniable treat.  “Ain’t Spending No More Money” is another hot original, that boasts more searing blues.  It makes me realize just how much I enjoy the cohesiveness of this band.  They really gel.


I love the smoking guitar doled out by Abeyta on the cover of Charley Jordon’s 1931 recording “Keep it Clean”.  Their take on Junior Wells’ “So Tired (I Could Cry)” simmers quite nicely.  Clifton smoothly sings this with a suave delivery.  For the album closer, they delightfully nail down a rollicking version of Merle Haggard’s “Honky Tonk Night Time Man”.  It really cooks.


In the Middle of Nowhere is as solid a blues album as one can be.  It really made an impression on me.

For more information about the artist, visit this website.. www.johncliftonmusic.com

Posted by PhillyCheezeBlues at 3:14 PM No comments: 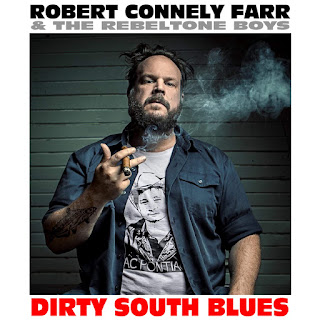 
Growing up in Bolton, Mississippi (hometown of Charlie Patton and The Mississippi Sheiks) and mentored by Jimmy ‘Duck’ Holmes, puts Robert Connely Farr in a righteous spot to carry the torch for Bentonia blues.  Now a resident of Vancouver, Farr enlisted the expertise of Leeroy Stagger to produce this ten-track album featuring nine tremendous original songs, called Dirty South Blues.  Backing Farr, is the Rebeltone Boys, comprised of Evan Ushenko on lead guitar, Tyson Maiko on bass, Kyle Harmon on drums, and Michael Ayotte on keys.


The hypnotic rolling rhythm of “Ode to the Lonesome” quickly garners my attention as Farr poignantly reflects upon his fortress of solitude at the Cyprus Swamp.  Title-track “Dirty South Blues” gets real quite fast with Farr’s matter-of-fact lyrics accented by gobs of swampy slide guitar.  “Magnolia” is captivating and gut-wrenchingly dark.  Ayotte contributes a thick layer of ominous keys adding to the intensity.


Farr pays homage to the oldest surviving juke joint in Mississippi with the wonderfully gritty original “Blue Front Café”.  The Blue Front Café, owned by Jimmy ‘Duck’ Holmes is one of the many sites on the Mississippi Blues Trail, and is still in operation today.  Holmes even shares writing credits with Farr, on “Just Jive Blues”, a ripping piano-heavy blues tune with lots of twang.  This is a fun one indeed.  The way Farr tackles Skip James’ “Hard Time Killing Floor Blues” is plumb terrific.


Dirty South Blues is one rock-solid record of blues, and Robert Connely Farr is the real deal.


For more information about the artist, visit this website..  https://www.robertconnelyfarr.com

Posted by PhillyCheezeBlues at 5:36 PM No comments: 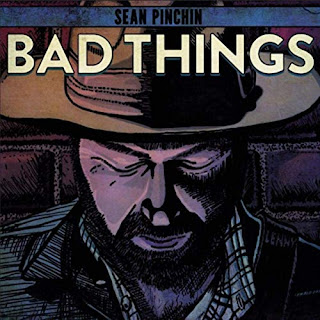 
I became a fan of Sean Pinchin two years ago when I reviewed his previous record, Monkey Brain.  His latest album Bad Things is out now, and it is fantastic.  The music on this eight-song disc is soaked in the blues, and filled with captivating hooks.  Pinchin mixes it up on electric, acoustic, resonator, and laptop steel guitars.  Rob Szabo handles bass, keyboard, percussion, and guitar to boot.  Mary-Jane Luvite drops the beats on drums and percussion.


The opening track, “If You’re Gonna Leave Me” comes across strong and fearless.  This anthem, dedicated to rocky relationships, absolutely cooks with a smoking guitar performance and a hardy vocal delivery.  Title-track “Bad Things” keeps the momentum going, with its infectious rhythm, and Pinchin’s mind-melting guitar.  It’s fabulous indeed.  Dark, ominous, and beautifully played, “Devil Got My Woman” is absolutely breathtaking.  I love the simple approach he takes when taking on Blind Willie Johnson’s “Nobody’s Fault But Mine”.  It is a pure and honest cover.  Lovely and delightful, Pinchin’s “River” is music for the soul.


This Canadian bluesman surely has a way about him, and his music positively stands out.  Bad Things is one terrific album.

For more information about the artist, visit this website.. https://seanpinchin.ca/


Posted by PhillyCheezeBlues at 3:25 PM No comments: