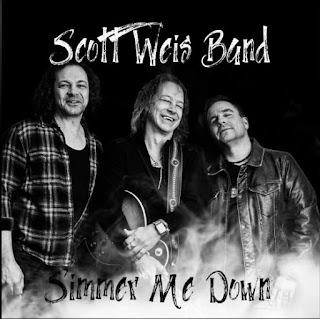 Simmer Me Down, the sixth release from Scott Weis Band, is a ten-track delight of electric blues.  With Weis on lead guitar and vocals, his trio also consists of Robert Kopec on bass guitar, and Roger Voss on drums.  Dedicated to the memory of Ben Elliot, who mixed and mastered the album, the record was recorded at Showplace Studios and features guests Cindy Mizelle on vocals, John Ginty on keys, Bashiri Johnson on percussion, and Phil Silverberg on keys.

The opening track “Pride and Soul”, delicately awakens to a hard-driving blues-rock gem.  Filled to the brim with the lush sound of keys and a crashing pulse, the song also contains a bodacious dose of slide guitar.  It’s a stellar way to get the album started.  Weis breaks out a little Cajun funk topped with side of harmonica on title track “Simmer Me Down”.  It’s such a fun listen.  Surrounded by a wonderful infectious rhythm, and accompanied by Mizelle on backing vocals, Weis sings “Helpless” with a soulful John Hiatt swagger.  The song is pure excellence.  Weis, Voss and Kopec absolutely rip it up on “Right Where It Belongs”.  This is blues-rock at its best.

Out of ten tracks on the recording, two are covers, and they are both terrific.  Weis performs Sam and Dave’s “When Something is Wrong with My Baby” with a mountain of heart and soul.  I love their take on ZZ Top’s “Jesus Just Left Chicago”.  Weis keeps this Texas blues favorite intact, while throwing his own spin into it.

The album closes with an amazing instrumental called “Transendence”.  It’s so reminiscent of the work of Tommy Bolin, it leaves me with a smile in my heart.  There’s no weak link in Simmer Me Down.  This album is about as solid as it gets.

For more information about the artist, visit this website : scottweisband.com

Posted by PhillyCheezeBlues at 4:22 PM No comments: 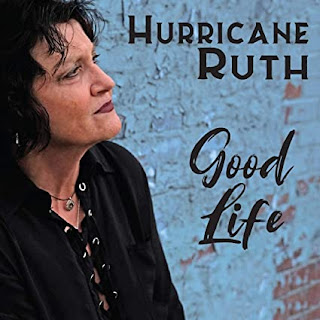 There’s no escaping the powerful voice and fierce style of Hurricane Ruth LaMaster in Good Life, her fifth and latest album.  Her fearless approach to singing the blues takes a backseat to none.  Produced by Ben Elliot (Savoy Brown, Leslie West, Hubert Sumlin) who sadly passed away April 5, 2020, this ten-track album comprised mostly of original songs features Scott Holt on guitar, Calvin Johnson on bass guitar, Bruce Katz on B3/keys, and Tony Braunagel on drums.

A t-shirt I purchased from guitarist Scott Holt seven years ago at a favorite blues-hangout called Checkers Tavern in Cedar Rapids, Iowa says, “Loud is Good!”.  Loud is indeed good, and that’s the apparent mantra from the git-go with the high-energy opener “Wildfire”.  With Katz pounding the keys, and Holt ripping it up on guitar, Hurricane Ruth gives a riveting performance on the mic.  The music gets even hotter and out of control on “Dirty Blues”.  I love it.  Written by two-time Grammy winning producer Gary Nicholson, “Torn in Two” is an excellent vehicle for Ruth’s hardscrabble style.  While the band is absolutely cooking, she takes this song by the horns and wrestles it to the ground.  There’s a hard-rocking Suzi Quatro-esque vibe on “Black Sheep” which I simply adore.  This reflective ode to Ruth’s younger badass self is a definite favorite.  “Who I Am” is a killer track with lots of tasty jam.  A deep heavy pulse from Braunagel and a funky taste of keys from Katz opens the song as Ruth sings about leaving her partying days behind.

Hurricane Ruth packs a fistful of gusto into Good Life, delivering yet another rock-solid record of blues.  It’s definitely an album which I will keep in rotation for a while.

For more information about the artist, visit this website : hurricaneruth.com

Posted by PhillyCheezeBlues at 3:25 PM No comments: 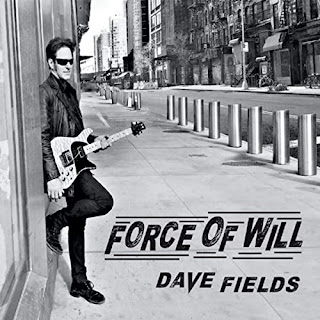 I’ve been a fan of Dave Fields since reviewing his All In album which was released in 2014.  This New York City blues-rocker is such a remarkable musician, he never ceases to impress me with each new release.  He has risen to a whole new level with Force of Will, his latest album.  This record featuring ten tracks of all-original songs and is an amazing listen.

Fields fabulously kick-starts the record off with a high-energy anthem of affection called “I Love My Baby”.  His infectious guitar riff and soulful vocals are accompanied with a delightful bluesy blast of harmonica from Bill Ferris.  Following up is hard-driving rocker “Big Block”.  Jam-packed with gobs of luscious, screaming guitar licks and astounding thunder-filled beats from drummer Van Romaine, this one is a monster.

With a soulful slow-cooked delivery, Fields doles out gut-wrenching, down-home blues with “Why Can’t You Treat Me Right”.  Bassist Bjørn Hägset and drummer Käre Amundsen recording their parts from Molde Norway provide the rhythm section for this track.

Like Van Halen’s “Eruption” which lead into their cover of the Kink’s “You Really Got Me”, Fields’ “Delmar” is a short yet intense guitar instrumental leading up to another mind-blowing instrumental called “Jack Ham Her”.  The latter, with Erik Boyd on bass and Romaine on drums, grabs my full attention as it quickly reminds me of how in awe I was of Joe Satriani when I first heard Surfing with the Alien.  These two astonishing tracks tremendously caught me by surprise.

Records like Dave Fields’ Force of Will keep me optimistic on the future of music.  The album is a great listen from start to finish.

For more information about the artist, visit this website : davefields.com

Posted by PhillyCheezeBlues at 3:40 PM No comments: 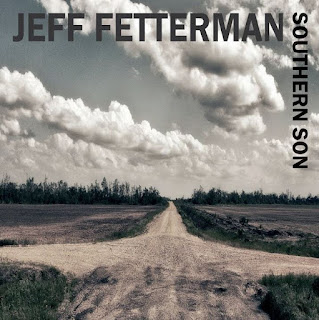 Southern Son, the latest release from Jeff Fetterman has quickly garnered my affection.   Produced by Christoffer ‘Kid’ Andersen and recorded in California at Greaseland Studios, this twelve-track record is chockful of riveting blues-rock, with a tasty side of funk.  With Fetterman on guitar and vocals, his band is comprised of guitarist Eric Brewer, bassist Ralph Reitinger III, and drummer John McGuire.  Also appearing is John Halbleib on trumpet, Ric ‘Mightybone’ Feliciano on trombone, Doug Rowan on saxophone, and Kid Andersen on guitar, organ, piano, percussion and background vocals.

Fetterman’s searing guitar on his high-energy opener “I Don’t Want To” sounds great with the horn-infused band and organ accompaniment.  The legendary tale of Robert Johnson’s pact with the Devil at the crossroads is a delightful and fun homage in “49/61”.  From the opening riff on “Ain’t Got You”, I’m hooked.  This big and bluesy hit infectiously rocks.  I love how “Blues for Charlie” gently drifts skyward-bound, like “Breathe” from Pink Floyd.  Beautifully executed, and performed, this instrumental is utterly remarkable.  Just as this track ends, Fetterman rolls into the only cover song on the album, “All Along the Watchtower”.  Here he takes a magical Isaac Hayes-inspired intro, before kicking the song into high-gear with a jaw-dropping guitar and vocal performance.  Behind the drums, McGuire grabs my attention fast with his thunderous and majestic beats.  This is my favorite track on the album.  Fetterman and company give up the funk on an incredible instrumental called “Voodoo Funk”.  It is another absolutely amazing song.

Fetterman’s Southern Son surely shines, and is one spectacular listen.

For more information about the artist, visit this website : jefffetterman.com

Posted by PhillyCheezeBlues at 3:35 PM No comments: