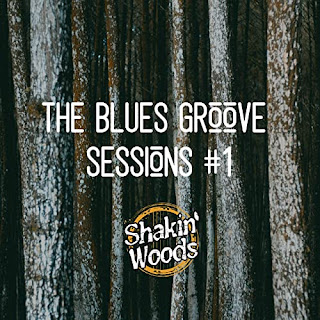 Hailing from the Washington DC metro area, Shakin’ Woods, is a blues-rock band drenched in funk and southern-soul.  This talented quartet was formed in 2019 and is comprised of singer/guitarist Rich Russman, keyboardist/guitarist Austin Day, bassist George Belton and drummer Paul Dudley.  The Blues Groove Sessions #1, a four-track EP, is the first of several EPs planned to be released by the band this year, with the next released titled The Blues Proper Sessions #2.

I love the funky bass groove running through ‘Like a Superman”, it tracks wonderfully with the disco-friendly pulse Dudley creates.  Russman delivers the goods with the finesse of Steely Dan, incorporating smooth vocals, and a standout guitar performance.  “The Place to Be” leaves me with a big grin on my face as the friendly Phish-like groove creeps over to a psychedelic Hendrix-influenced bridge, and then back again.  Then while on the subject of Phish, they fantastically cover Trey Anastasio’s “Cayman Review”.  The EP ends on a beautiful and melancholy note as Russman sings of intertwined souls in “Still Alive”.  I can feel the emotion pouring out of his guitar in lush and bountiful waves.

The Blues Groove Sessions #1 is absolutely marvelous.  I can’t wait to hear the follow-up EPs.

For more information about the artist, visit this website : shakinwoods.com

Click on the link below to purchase this terrific album from the PhillyCheeze Amazon Store.  As an Amazon Associate, I earn from qualifying purchases.
Posted by PhillyCheezeBlues at 5:03 PM No comments: 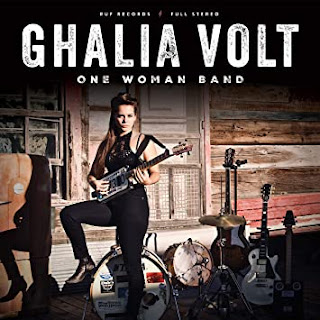 I was first introduced to the talents of Belgian-born blues artist Ghalia Volt with the 2018 release of Let the Demons Out by Ghalia & Mama’s Boys.  For that recording, which I absolutely loved, Ghalia teamed up with New Orleans bluesman Johnny Mastro and Mama’s Boys.  This past March she started a new one-woman philosophy and took it Mississippi to test drive the new arrangement.  According to Ghalia, “I started playing on a real drum set, playing a kick, snare, and hi-hat plus a tambourine with my two feet, while playing slide/guitar and singing at the same time.”  So for this latest album One Woman Band she flies solo, recording all the instruments live at once and ditching the popular multi-track route.  The recording which took place at Royal Sound Studios in Memphis, Tennessee includes guest appearances from Dean Zucchero on bass, and Monster Mike Welch on guitar.

Ghalia delivers “Last Minute Packer” with pure raw gusto and powerful, yet delicate vocals which sound fantastic.  Her slide guitar prowess certainly demands attention on “Espiritu Papago”.  Zucchero’s steady thumping bassline solidly holds the fort down, as Ghalia’s vocal and guitar performance reaches a somewhat hypnotic state.  “Can’t Escape” chugs along like a locomotive, and is slathered with gobs of swampy slide.  It takes me right to the heart of the Mississippi Delta.  She keeps that deep blues rolling on breakup song “Reap What You Sew”.  It’s such a treat to hear her play.  “Bad Apple” is undoubtedly a strong selection too.  This original song is absolutely stellar.  Ghalia tackles Tampa Red’s “It Hurts Me Too” with feeling and finesse, as she pours herself into the performance.

It’s obvious Ghalia Volt has spent a lot of time in the Mississippi Delta, soaking up as much of its spirit as she possibly can.  That’s certainly evident on One Woman Band.   Magnificent and timeless, this album is one hundred percent pure blues.

or more information about the artist, visit this website : ghaliavolt.com

Take a listen to the album on Apple Music, and if you decide to purchase it, use my special link.

Posted by PhillyCheezeBlues at 1:44 PM No comments: 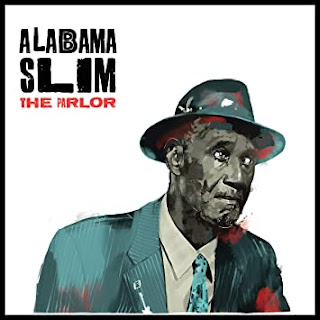 Originally from Vance, Alabama, Milton Frazier aka Alabama Slim was born in 1939 and moved to New Orleans in 1965.  It was there when he started jamming occasionally with his cousin Little Freddie King.  By the 1990’s they had become best of friends, and spoke to each other on a daily basis.  In 2007, with the help of the Music Maker Relief Foundation, they cut an album together called The Mighty Flood.  In 2010 Alabama Slim recorded his first solo album Blue & Lonesome, which was also made with the help of the MMRF.  And now, a little over ten years later he has a brand new fabulous record of fresh downhome blues called The Parlor.  The album was recorded in New Orleans at The Parlor Recording Studio in four hours’ time, and incorporates the talents of Jimbo Mathus (Squirrel Nut Zippers) on piano/organ, and Matt Patton (Drive-By Truckers, Dexateens) on bass and Ardie Dean on drums, with Alabama Slim front and center on guitar and vocals.  As an added bonus, Little Freddie King even steps into the studio with guitar in hand to record a track.

From the first few measures of “Hot Foot”, I knew this was going to be an extraordinary record.  Slim’s guitar picking is a blues-lovers delight.  Next up, Slim brings his cousin Freddie in for the hard-driving “Freddie’s Voodoo Boogie”.  It’s absolutely wonderful.  Slim slows it down and sings about a woman who steals his heart in “Rob Me Without a Gun”.  Story-telling songs like this one really grab me, especially when sung with the conviction Slim incorporates into his performance.  Mathus and Slim form a most interesting partnership of guitar and piano in the slow blues of “All Night Long”, a first-person account of a man in search of his two-timing gal.  A soulful Stax-like groove runs through “Forty Jive”, a political satire number which goes right for the jugular.  His cover of Sleepy John Estes’ “Someday Baby” is played with finesse and puts a smile on my blues-loving face.

The Parlor is certainly a recording to be embraced.  It captures Alabama Slim in a non-filtered environment, allowing the music to be heard the way it was meant to be.  Records like this just aren’t made this way anymore.

Posted by PhillyCheezeBlues at 5:10 PM No comments: 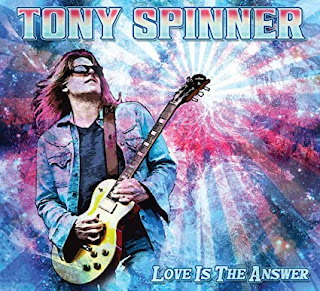 After nearly eight years since releasing his last album Earth Music for Aliens, Northeast Arkansas blues-rocker/guitarist extraordinaire Tony Spinner is back with a fabulous new record Love is the Answer.  Spinner joins bassist Michel Mulder and drummer Alex Steier once again in the studio for this project which spans a dozen original tracks. Recording took place at three locations: The Farm in Jonesboro, Arkansas, Lil’ Heaven Studios in Arnhem, Netherlands and Chill Hill Studio in Italy.

Spinner introduces the opening track “Same as it Ever Was” in a spaghetti-western fashion. Then with a blast of mind-blowing guitar shredding, switches into full-on funk. It sounds great!  His infectious groovy funk continues on with “Dizzy”, with Spinner waxing nostalgic in an attempt to escape the insanity of the world.  I love his jazz-guitar ode to little green men in “U.F.O.”.  It’s so fun to hear him play this one.  With title-track “Love is the Answer”, Spinner sings a message of peace and love, making for a beautiful ballad.  The slide blues that pours from “True Love” is absolutely great.  Laden with a plethora of aural treats, instrumental “Chun-Key” puts a gigantic smile on my face.  Boasting seven and a half minutes of southern funk, “Big River” is another favorite.  This composite of Allman and Marley is out of this world, and surprises me at every turn.  Spinner truly out does himself on this track.

This is the third Tony Spinner album I’ve reviewed over the years, and he never ceases to amaze me. Love is the Answer is a gem indeed and I highly recommend this record.

For more information about the artist, visit this website : www.tonyspinner.com

Posted by PhillyCheezeBlues at 4:36 PM No comments:

#480 : Kerry Kearney - Tales From the Psychedelta 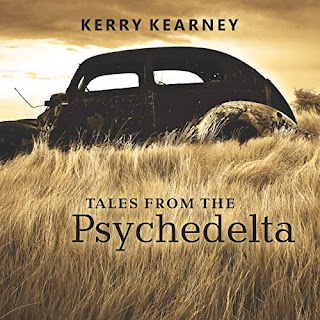 Tales From the Psychedelta, the latest release from New York Blues Hall of Fame inductee Kerry Kearney is absolutely fabulous.  It’s such a pleasure to hear a slide guitar master of his caliber beautifully playing original blues.  Kearney’s music covers subjects which all have a distinct place in the Mississippi Delta, such as Memphis, trains, voodoo, the Mississippi River, and Jesus.  The dozen songs on this album flow like the river itself from one song to another.

From the git-go Kearney rips it up with a high-energy Allman Brothers vibe on “Five Time Man”.  Note after note of precision finger-picking bring this masterpiece to the forefront.  The swampy delta slide guitar on “Mississippi River Stomp” is wonderful and lush.  “Memphis High” is an experience in and of itself.  With drummer Eileen Murphy throwing down an infectious beat, and Charlie Wolfe dropping his hot harp licks, Kearney gives a magnificent raw unbridled performance.  Tony Campo on organ, creates a rich and ominous backdrop for the Santana-esque “Voodoo Down the River”.  “Runnin’ Weepin’ Tremblin’” sounds so damn good too.  It certainly satisfies my sweet tooth for riveting blues guitar.

Kerry Kearney’s Tales From the Psychedelta is a terrific listen from start to finish.  It’s one of those albums I find myself leaving on repeat for several cycles through at a time.

For more information about the artist, visit this website : www.kerrykearneyoffical.com

Posted by PhillyCheezeBlues at 4:29 PM No comments: