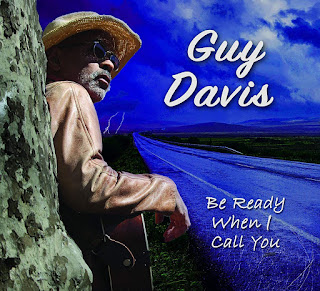 Guy Davis, nominated for the Grammy’s Best Traditional Blues Album in 2017 with Sonny & Brownie’s Last Train, has just released another possible Grammy contender with Be Ready When I Call You.  With this new album from the Ambassador of the Blues, Davis brilliantly dissects our American culture with a potent and hearty serving of blues.  His talents run deep as he performs his music on acoustic guitar, banjo, harmonica, and tambourine with Professor Louie on keys, Gary Burke on drums, John Platania on electric and acoustic guitars, and Mark Murphy on stand-up bass and cello.  Also appearing on the album is Christopher James on acoustic guitar, 6-string banjo, and mandolin, Jeff Haynes on percussion, and background singers David Bernz, Timothy Hill, and Casey Erdman.

Davis begins the listening experience with a boisterous journey aboard the sixteen coach long “Badonkadonk Train”.  The record takes a heavy, eye-opening turn with “God’s Gonna Make Things Over”, as Guy relays the grim and matter-of-fact account of the 1921 Tulsa Race Massacre.  With a hook that’s infectious as hell, title-track “Be Ready When I Call You” tells the story of Robert Johnson’s legendary meeting with the devil at the crossroads.  Banjo in hand, Davis advises the listener to don’t drink the water in “Flint River Blues”, a captivating song about the disasterous 2014 water crisis in Flint, Michigan in which the water was so full of lead and toxins, people were getting deathly ill.  Davis taps into his inner Howlin’ Wolf to fearlessly deliver the blues classic “Spoonful”, the only cover song on the album.  It sounds fantastic.  I love the closer “Welcome to My World”.  The psychedelic guitar licks he sprinkles into the song catch my attention as he taps into the current state of the world with thought-provoking lyrics which flow out of his mouth in a carefully constructed cadence.

Guy Davis’ Be Ready When I Call You is quite an exceptional album of traditional blues and Americana.  It’s very powerful.

For more information about the artist, visit this website : www.guydavis.com

Posted by PhillyCheezeBlues at 4:12 PM No comments: 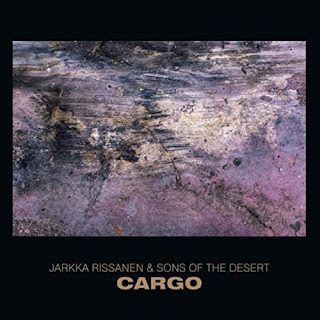 Jarkka Rissanen, a forty-plus year veteran of the music scene is a legend among Finnish roots music fans.  His latest record Cargo marks his seventh under his own name, and follows up quite nicely to his previous album Hybrid Soul, which was awarded Best Finnish Album of the Year by Blues Finland magazine.   This nine-track album is entirely comprised of instrumentals and features guitarist Rissanen along with guitarist Markus Väisänen, percussionist Esa Kärki and bassist Ilpo Komulainen.  Their music incorporates bits and pieces of influence ranging from Chicago and Delta Blues, to the Big Easy and beyond.  I love this amalgam of blues and jazz.  It’s speckled with phenomenal jams and amazing surprises.

“Rocking Chair” washes over like a cool breeze on the front porch at the end of a hot summer day, lulling me into a state of peacefulness with its gentle riff and relaxing melody.  “Cargo” follows up, nicely segued and maintaining a meditative state for a while, until it wakes up and sweetly begins to accelerate.  Without going too far, it eventually returns back to its original launch pad with an array of cosmic guitar licks and spacy percussion.  Then the hypnotic rhythm of “Mousetrap” rolls out and draws me right in to its enchanting, funky lair.  I love the swampy sliver of slide guitar Rissanen tosses into the mix.  The fresh funky jazz piece called “Tofu Queen” is light and intoxicating.  It brings a smile to my face with every listen.  In a Pink Floyd syle, “Once Upon a Time” gracefully brings this brilliant album to its euphoric end.

Cargo is such an extraordinary listen.  It’s absolutely flawless.

Also available on Apple Music:
Posted by PhillyCheezeBlues at 3:21 PM No comments: 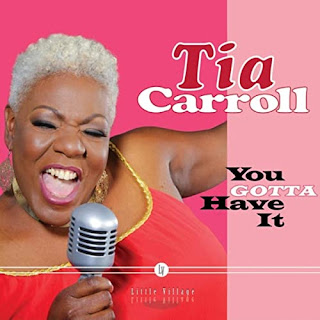 I greatly respect the work of Little Village Foundation, and their dedication to helping talented artists who may have no other means to get their music recorded and distributed.  One of the latest releases for this non-profit organization is for Bay Area (Richmond, CA) singer-songwriter Tia Carroll.  Her voice is a soulful and powerful one, and it sounds fabulous with the backing of Greaseland Studio musicians the great Kid Andersen on guitar, Jim Pugh on piano/organ, and Steve Ehrmann on bass.  Blessed with over thirty years of experience, Carroll has performed professionally with artists such as Jimmy McCracklin and Sugar Pie DeSanto.  Although Carroll has prior recordings with bands in Italy and Brazil, You Gotta Have It is her first album recorded stateside.  Produced by Andersen and Pugh, this grand album consists of eleven spectacular tracks, three of which are Carroll’s own original songs.

I absolutely love her opening track “Ain’t Nobody Worryin’”, featuring Charlie Hunter on guitar/bass.  Backed with a funky beat, and topped with Carroll’s brilliantly executed lyrical cadence, she breathes new life to this gritty streetwise song originally from Anthony Hamilton’s 2005 album by the same name.  Her vocals shine brightly and exhibit amazing range on “Even When I’m Not Alone”.  This song oozes with slow soul, and is beautifully graced with Pugh’s organ accompaniment.  There’s something about a nice big blast of horns on a song that sweetly punches a song up and “Don’t Put Your Hands on Me” sets a wonderful example.  Written by Rick Estrin for the late, great Koko Taylor, this track is a grand one to say the least.  Another of Carroll’s originals “Leaving Again” effortlessly woos me over with its mid-Seventies Isaac Hayes vibe.  You Gotta Have It comes to a poignant close with a warm and groovy cover of The Staple Singers’ 1967 release “Why Am I Treated So Bad”.  Carroll sings this perfectly in every way with backing vocals from The Sons of the Soul Revivers (James ,Walter, & Dwayne Morgan).  The whole band comes together so very nicely for this one too.

I certainly hope we get to hear more of Tia Carroll.  You Gotta Have It is a powerful album lush with musical talent.  It’s an absolutely striking recording.


Or click on the link below to purchase this terrific album from the PhillyCheeze Amazon Store.  As an Amazon Associate, I earn from qualifying purchases.

Posted by PhillyCheezeBlues at 3:02 PM No comments: 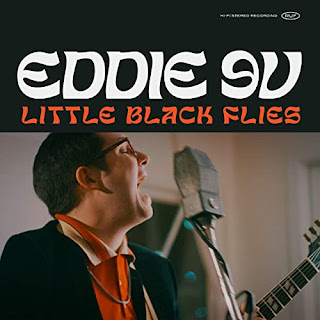 Little Black Files marks the third album for the twenty-five-year-old Atlanta-area singer-songwriter Eddie 9V, aka Brooks Mason, and it’s going to be hanging tight nearby and ready for play at any given time this Summer.  Recorded live in the studio, with an arsenal of top Georgia-based musicians, this cocktail of blues and southern soul that Eddie 9V has masterminded, makes for a fresh and invigorating listen.  With Eddie on lead guitar and vocals, the recording band is comprised of Cody Matlock on rhythm guitar, Lane Kelly, Brandon Boone (Tedeschi Trucks Band), and Marvin Mahanay splitting up the bass guitar parts, Chad Mason on organ and Fender Rhodes, Jackson Allen on harp, Aaron Hambrick on drums, Mandi Strachota on background vocals, and Sam Nelson on alto and tenor sax.

I absolutely love the soulfulness of “Little Black Flies” which ushers the album in.  This timeless song of infatuation with a girl engaged in an abusive relationship with another man is downright brilliant.  With every listen, I’m reminded of how much I adored Alabama Shakes’ Sound and Color album when I first heard it.  “3 AM in Chicago” slides right in with a slow groovy beat and buttery bassline.  Eddie’s smooth vocals shine brightly on this intoxicating track.  His unbridled cover of Albert King’s “Traveling Man” sounds fantastic as he’s ripping it up on guitar amid a grand rhythm section backing topped with some serious keyboard accompaniment.  “Miss James” is another terrific cover.  This song off Howlin’ Wolf’s 1971 Message to the Young album is fun and funky.

It’s apparent Eddie 9V listened to a lot of blues growing up.  When hearing originals such as “Reach Into Your Heart”, you hear the blues, but it’s very well crafted and bypasses the ‘cookie cutter’ blues formula which many current blues artists rely on.  “Putting the Kids to Bed” is fabulous song too.  It has a 70’s Rolling Stones vibe, and I can absolutely hear that Mick Jagger attitude in Eddie’s voice as he releases little growls like grenades thrown with precision.

Little Black Flies is one my favorite releases of 2021.   I highly recommend it.

For more information about the artist, visit this website : www.eddie9v.com

Or use the link below to purchase this terrific album from the PhillyCheeze Amazon Store.  As an Amazon Associate, I earn from qualifying purchases.

Posted by PhillyCheezeBlues at 2:51 PM No comments: