#507 : Chris Gill - Between Midnight and Louise 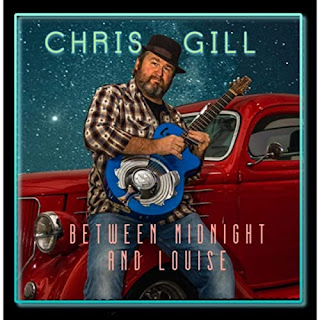 With several albums under his belt and over twenty years of playing music, Mississippi bluesman Chris Gill states his latest release Between Midnight and Louise is the record that’s been on his mind a long time.  The title gets its name from a highway sign just outside of Yazoo City, Mississippi which points to the two towns of Midnight and Louise.  The title definitely sets the tone of this charming album comprised of Gill’s stripped-down Delta Blues.  Recorded by just him, his old guitars, two mics and a little amp, he meticulously brings the listener right into his swampy world, and it’s absolutely delightful.

I love the muddy slide-work on his ode to David ‘Honeyboy’ Edwards called “Song For Honeyboy”.  It’s certainly a fitting homage to the bluesman who played with the legendary Robert Johnson in the 1930’s and passed away in 2011 at the age of 96.  A rolling melody from his guitar coupled with Gill’s smoky vocals put a smile on my face with “Back to Paradise”, a song about trying to break this world out of the insanity which seems to have taken over.  For anyone who’s spent the hot summer months in Mississippi, the words of “Fleas and Ticks” will ring true.  On this song, his instrument of choice is a vintage 1930’s Supertone, and it sounds terrific.  Gill’s mastery of story-telling downright shines on “Long Distance Highway”, an absolutely beautiful song about a musicians’ life on the road.  Like watching the last rays of the sun shoot across the sky on a summer’s evening sunset, title track “Between Midnight and Louise” gently brings the album to its end.  It’s a stunning instrumental played in open G with a ’31 Duolian.

Chris Gill is an amazing guitarist and songwriter.  Blues fans should definitely seek this album out.

Use the link below to purchase this terrific album from the PhillyCheeze Amazon Store.  As an Amazon Associate, I earn from qualifying purchases.

Posted by PhillyCheezeBlues at 3:48 PM