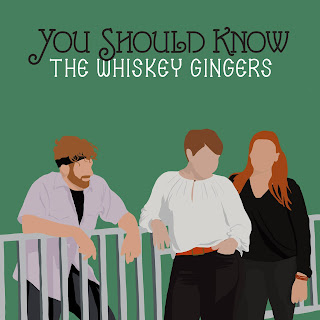 Beautiful vocals, rich harmonies, and catchy melodies quickly capture my attention on You Should Know, the debut album from the Oklahoma-based acoustic trio The Whiskey Gingers.  Their brand of music playfully expands across multiple genres producing their own special blend of pop-country-folk-rock.  Beginning as a duo comprised of Jess Crothers and Jenny Bendure, who had met at the 2017 SongWriters Association of Norman, The Whiskey Gingers incorporated bassist/vocalist Michael Bendure shortly after forming in 2018.  Honorary Gingers for the recording of this record are Mike Marty on drums, T.Z. Wright on accordion/keys, Bob French on banjo/mandolin, Gregg Standridge on guitar, Kent Graber on violin, Ethan Hicks on clarinet, Kevin Webb on steel guitar, and Bill “Top Dog” Cummins, David Henson, Jim “Big Train” Madsen, and Matt Stratton on claps/vocals.  Produced by Terry “Buffalo” Ware at Buffarama Studio in Norman, Oklahoma, the album consists of thirteen all-original songs.

Sweetly delivered lyrics which cut like a knife bring “Cowboy” front and center.  It’s such an amazing song.  “I Don’t Play with Boys” is absolutely terrific too.  The violin and mandolin accompaniment produces a tranquil tension as I soak up the Natalie Merchant / Julianna Hatfield vibe.  With a touch of accordion, steel guitar, and violin “I Love You Mostly” is a splendid western-flavored on-the-fence love song.  “Ghost” is another poignant example of their masterful lyrics, and lovely vocal stylings.  I’m quite drawn to the gentle, funky rhythm which sits behind the scenes on “Mockingbird”, another absolute favorite.  Those who have ever had a dog will certainly perk their ears up to take in “Daisy’s Song”.  I can’t help but grin with each listen, recalling pet pups of days gone by.

The Whiskey Gingers certainly scored with this record.   You Should Know is hands-downs one of the best American roots albums I’ve heard this year.

For more information about The Whiskey Gingers, visit their website : www.whiskeygingers.com

Posted by PhillyCheezeBlues at 1:31 PM