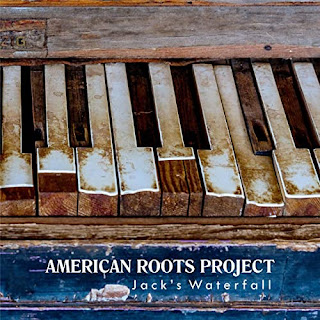 American Roots Project is the latest release from Jack’s Waterfall, a band which originated as The Water Street Blues Band, co-founded by pianist/vocalist Jack Licitra and harpist Steve Demanchick in the 1990’s.  The ten tracks of music are all-original songs written by Licitra and heavily steeped in New Orleans tradition.  The album quickly garnered my affection on the first listen.  Along with Licitra and Demanchick, Jack’s Waterfall is comprised of Mark Carpentieri (founder of M.C. Records) on drums, Trifon Dmitrov on bass, and Rod Borrie on trombone.

With the trickle of piano keys, and a second-line beat, the opener “Louise” rolls out in a carefree stroll, bringing a big smile to my face.  Licitra’s polished vocals pull me right in.  I love the vibrant NOLA barrelhouse mood and lyrical flow that gushes out in “My Baby’s Gone a Long Time”.  Lucitra is a true master of song-writing.  “Soul Rider” is another that steals my heart.  The soulful vocals are perfectly paired with a brilliant piano performance.  The funky jam of “Community” reminds me of good times at Phish concerts.  The song has been lodged in my brain for a few days now.  American Roots Project wraps up in a glorious way with “Like an Eagle”.  With the DNA of a strong Southern spiritual, this celebratory song is most definitely a feel-good one.

This album is terrific from start to finish, and leaves me wanting to hear more from Jack’s Waterfall.

For more information about Jack’s Waterfall visit this website :  https://www.jackswaterfall.com

Posted by PhillyCheezeBlues at 3:08 PM No comments:

#559 > The Harpoonist and The Axe Murderer - Live at the King Eddy (PhillyCheezeBlues.Blogspot.com) 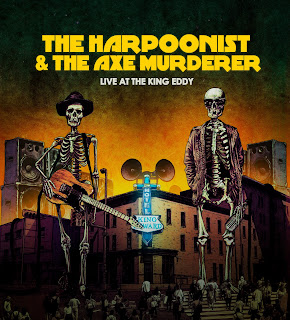 It’s a rare occasion where a live album is my first experience with a band’s music, and it turns me into an instant fan.  Live at the King Eddy, the latest release from The Harpoonist and the Axe Murder is definitely the center point of one of those occasions.  The Harpoonist is vocalist/harp player Shawn Hall.  The Axe Murderer is guitarist Matt Rogers.  The two together with vocalists Andrina Turenne and Dawn Pemberton, along with keyboardist Geoff Hilhorst throw down one hell of a shindig at the historical King Edward Hotel in Calgary.  That recorded performance celebrates fifteen years of collaboration of playing the Blues, and it’s absolutely wonderful.

“Cry a Little” trucks right on in, and gets things off to a swinging start with a funky harp-laden groove and whiskey-soaked vocals.  I can’t help but gush about the swamp-water soaked “Do Whatcha”.  Between the whirling sounds of Hillhorst’s organ and Hall’s guttural yelps, the song takes glamourous dips into the psychedelic realm.  From their most recent studio album Apocalipstick, “Pretty Please” is a fiery, rambunctious track which transforms the revival tent into a hot and sweaty blues tent, bringing everyone to their feet.  “Father’s Son”, another selection off the same studio album, is simply amazing.  I love how the driving beat and funky riff takes a cliff dive into another universe.  It’s certainly no “Cats in the Cradle”.  That’s for sure.  Rogers cranks up the heat on guitar for a cooking performance as Hall goes all-in on “Get Out” taking the blues to the brink of places I’ve never heard.  This track does indeed tear the roof off the sucker.

Live at the King Eddy is an absolute eye-opener for me.   The musical chemistry shared between these guys sure makes for some exquisite blues.  I hope I have the opportunity to catch them live in concert one of these days, because I’m sure it would be a hell of a good time.


For more information about this band, visit their website https://www.harpoonistaxemurderer.com/

Find this album on Bandcamp

Posted by PhillyCheezeBlues at 4:10 PM No comments: Next Stop, the latest release from Canadian blues-rocker Gary Cain, takes off like a rocket, and soars to the heavens.  His guitar prowess is extraordinary and an absolute treat to hear.  Cain, a 2018 semi-finalist at the International Blues Challenge in Memphis, Tennessee, has talents which run much deeper though.  This ten-track album reveals just how much.  Written and recorded in Austin, Texas, Next Stop is all Cain.  He wrote the music and lyrics, plays all the guitar and bass parts, sings, programs drums, and handles percussion.

Rocking an infectious Texas boogie, “Billionaires in Space” blasts the album off by taking a satirical jab at Elon Musk’s and Jeff Bezos’ ego-centric race to boldly go where no man has gone before.  Cain seemingly draws inspiration from Jimi Hendrix on “Confusion”.  His powerhouse performance is so hot, it downright cooks.  Cain furiously throws everything he has into “Kitchen Sink”.  This fabulous instrumental brings to mind a favorite by The Aristocrats called “Kentucky Meat Shower”.  It’s an exhilarating experience to hear Cain’s intense guitar picking riding the bleeding edge of his barreling beat.  Reaching the tipping point of being fed up is a gradual process and that’s the way Cain goes with “Gone” a song with that exact theme.  The mellow and melodic atmosphere stretches outward and inward, taking heavy and funky turns with its cozy groove.  Next Stop wraps up with “A Short, Furious Goodbye” with special guest John Lee on B3 organ.  This cosmic instrumental clocks in at two minutes, seventeen seconds and beautifully lives up to its name.

Next Stop is one album guitar aficionados will definitely want to give a listen to.  It’s fantastic.

For more information about Gary Cain, visit this website :  https://www.garycainband.com

Posted by PhillyCheezeBlues at 3:33 PM No comments: 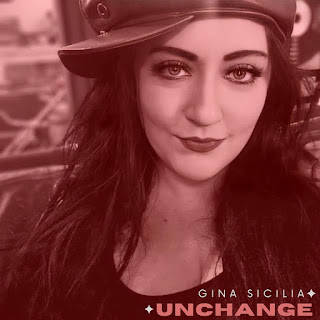 Since reviewing Gina Sicilia’s 2016 album Sunset Avenue, I’ve made a point to check out her music as it is released.  Her latest record Unchange is rather spectacular.  Produced, recorded, and mixed by Colin Linden at Pinhead Recorders in Nashville, Tennessee, Unchange features Linden on guitars and vocals, Johnny Dymond on bass, and Bryan Owings on drums to back Sicilia’s beautiful voice.

The opening track “Healing Time” is a wonderous splash of slow, soulful blues with Kevin McKendree on piano.  Sicilia draws me immediately in with her sensational vocal artistry and she sounds fabulous.  She continues to amaze me as title-track “Unchange” follows up in a cloak of poignancy and a beautiful performance from Linden on guitar.  I love it when she breaks into the classic blues traditional “Make Me a Pallet on Your Floor”.  Guest backing vocalists Ann and Regina McCrary add a really nice touch to this extraordinary song.  Sicilia and Linden turn on the heat when they get to the cover of Reverend Gary Davis’ “Death Don’t Have No Mercy”.  Its twangy goodness is seared to perfection.  Sicilia takes crooning to the next level on “Don’t be Afraid to be Wrong”.  With Bohemian nuances sewn into its fabric, this delightful song is indeed a favorite.

The divine voice of Gina Sicilia hits all the right notes for a classic taste of pure Americana.  Unchange is an absolutely stunning album.

For more information about Gina Sicilia, visit this website :  https://www.ginasicilia.com

Posted by PhillyCheezeBlues at 2:41 PM No comments: