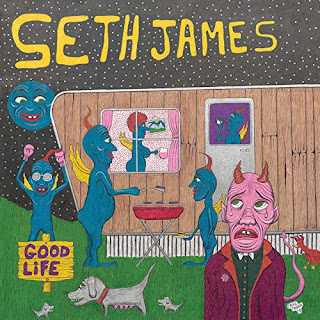 Good Life, the latest from Texas singer/songwriter Seth James captivated me from the beginning.  Sitting in that same wheelhouse of music which encompasses the songs of John Hiatt and Delbert McClinton, this album is a bowlful of soulful Americana.  James, on guitar and lead vocals is joined by Bob Britt on rhythm and slide guitar, Lynn Williams on drums, Kevin McKendree on keys, Steve Macket on bass, Jim Hoke on saxophone, Roy Agee on trombone, and Vinnie Ciesielski on trumpet.  The cover art from Paul Thorn is a blast too.  I can’t help but smile when it catches my eye.


Title track, “Good Life”, is a wonderfully soulful tune with a spirited and catchy hook to jam out to.  I love the Memphis Stax-style delivery the band packs into “Little Angel”.  James’ impassioned words in this love-letter are moving and heartfelt.  For anyone who’s spent any amount of time away from their home and loved ones, “I’m Coming Home” beautifully expresses the joy-filled anticipation of returning to roost in one’s own abode.  I love “Medicine Man”.  It’s fun and funky rhythm is topped with a wily guitar riff, and slathered barrelhouse-friendly keys.  The stand-out song on this disc, however is “Third Generation”.  In this terrific selection, James takes an intelligent look at how the wealth created through hard work in one generation, is carelessly dismantled and thrown away by the third.


Good Life is a splendid mix of roots, blues, soul, and country, culminating into one fantastic album.  I highly recommend it.


For more information about the artist, visit this website.. www.sethjames.com

Posted by PhillyCheezeBlues at 5:23 PM No comments: 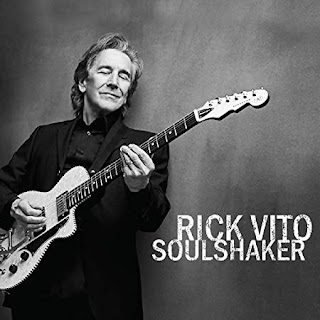 
Soulshaker, the tenth and latest disc from Rick Vito is terrifically enchanting.  Vito, who was a member of Fleetwood Mac from 1987 – 1991, has also played with a truck-load of my favorite artists, such as John Mayall, Bob Seger, John Prine, Bonnie Raitt, Delbert McClinton, and Todd Rundgren.  With Charles “Mojo” Johnson manning the drums, Vito handles most everything else: guitars, vocals, bass, and keys.

Vito sets a mysterious retro atmosphere in “I’ve Got a Secret”.  Beautifully played and sung with a crooner’s finesse, it pulls me right in.  Laced with a fistful of boogie and slide guitar, “I Do Believe” is a nice jam indeed.  This spirited tune hosts drummer Rick Reed, bassist Charles Harrison, and organist Mark Horwitz.  Vito breaks out some delicious Texas blues on “World On Fire”.  His guitar performance shines bright on this absolutely fabulous song.  “Ball and Chain” is another favorite.  I love the tribal beat Johnson lays down.  It meshes quite nicely with the ominous sounds Vito concocts with his slide.  Wrapping up the album, is a lovely heartfelt instrumental of Sam Cooke’s “Change is Gonna Come”.  Words are not needed.  Vito’s guitar speaks for itself on this one.

Vito’s style is unique and sits atop a conglomeration of blues, roots, and pop.  Regardless of which style each song gravitates to, it’s a joy to hear him play.  Soulshaker is definitely a winner in my book.

For more information about the artist, visit this website : www.rickvito.com

Posted by PhillyCheezeBlues at 5:03 PM No comments:


I’ve visited Clarksdale several times over the past few years, but until this past weekend, my visits were solely to stop in at my favorite store, Cathead Delta Blues & Folk Art, to shop for blues-related music, books, and videos.  I was blessed to be invited along for an excursion to Mississippi by a wonderful group of blues aficionados ( Kyle, Kevin, Galen, Aaron, Jim, and Terri), this past weekend, and had an amazingly fun experience listening to many of the blues artists I have only written about the past few years.   It was great to actually see these artists in person, and in some cases, even meet, shake their hand, and share a few words.


On the trip down from Iowa, we had a stop-over in Memphis, Tennessee where we stayed one block off Beale Street at the renovated Chisca Hotel.  This historic landmark once housed WHBQ, the radio station which was the first to play Elvis Presley’s “That’s Alright Mama” and launched the career of the King.  We grabbed a hearty bite to eat at the Blues Café and steeped in the music of the Eric Hughes Band at the Rum Boogie Café.


Upon arrival to Clarksdale, we stopped over at the Cathead for some shopping, before checking in to the Shack Up Inn, a unique and eclectic place to say the least.  This B&B (Bed and Beer) joint is a makeshift community of restored sharecropper shacks.  The lobby and bar are housed in a building which was once a cotton gin, and is chockful of oddities and vintage signage. I would love to have more time to just look around this place.   Later that evening had a fine dinner of grits, greens, and barbeque before heading over to Ground Zero Blues Club for the open jam hosted by the David Dunavant Band.  Jim, from our group, entertained a full house at the Ground Zero with a couple of songs on his beautiful hand-painted psychedelic-green guitar. That was very cool indeed.  We wrapped Thursday evening up at Red’s Juke Joint, to hear Terry “Harmonica” Bean.  The place also happened to be packed with blues fans from around the world.  Rightly named, the venue is illuminated by strings of red Christmas lights which stretch across the low hanging ceiling.


Early Friday, we all loaded into a couple of cars to explore the delta region in search of gravesites and landmarks.  Included in the places we located were the markers for Aleck Miller aka Sonny Boy Williamson II and two of the three known Robert Johnson markers.  We navigated to Tutwiler where W.C Handy was inspired to write the song “Yellow Dog Blues”, then headed to Moorhead, MS, where the Southern Railway crossed the Yazoo Delta (“Yellow Dog”).  The Crystal Grill in Greenwood served as the perfect lunching destination.  The hamburger and sweet potato fries were splendid, and I could not deny myself a delectable slice of their lemon ice-box pie.  It was so good; I’m still thinking of it three days later.  Before heading back to Clarksdale for the music festivities, we made a final stop outside the gates of Parchman Farm, the Mississippi State Penitentiary where many blues songs got their inspiration and where a fair share of bluesmen spent time.  It once served as temporary residence for ‘Bukka’ White, R.L. Burnside, and reportedly Sonny Boy Williamson II.
Kicking things off on the main stage Friday night for the Sunflower River Blues and Gospel Festival were The Delta Blues Museum Band, a group of very talented young music students being schooled in the Blues.  It’s a delight to see the torch being handed down to another generation.  It was also terrific to see Heather Crosse with Heavy Suga and the SweetTones.  Unfortunately, the electricity to the stage was knocked out, and the evening was cut short.  I reviewed her album Groovin’ at the Crosse Roads several years ago, and absolutely loved it.


On Saturday, the festival features music on nine separate stages downtown, all of which are indoors, with the exception of the main stage.  The main stage sits next to the Delta Blues Museum where we began the day with an enlightening visit.  I definitely got my steps in, as I criss-crossed town, making stops at Ground Zero Blues Club, Levon’s Bar & Grill, Hambone Art & Music, Red’s Lounge, and The Blueberry Café to hear Kenny Brown, Pat Thomas, Deak Harp, Little Willie Farmer, Terry ‘Harmonica’ Bean, Super Chikan, and Anthony ‘Big A’ Sherrod.  The weather was perfect as we settled in at the main stage for Big George Brock followed up by David Dunavent & EVOL Love.


Closing the evening out at Hopson Plantation Commissary next door to the Shack Up Inn, I was captivated by an ensemble called Black Water Trio, a local Clarksdale group which normally plays as a three piece with two guitars and fiddle, but for this evening, they were a five-piece band complete with drummer and bass. I loved the unique blend of country-fried roots and rock.  They were an absolute blast, as was the whole trip.
---


Red’s Juke Joint – This is a juke joint son, there ain’t no website!