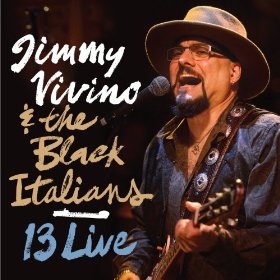 Vivino tears it up on guitar as Cabrera does the same with his harmonica on Bob Dylan’s “From a Buick 6”.  And what’s really cool about the performance of “Maggie’s Farm”, another Dylan song, is the dueling lead vocals by Vivino and Russell. Splitting the song into male and female lead parts makes it interesting.  Also, the background vocals take on the role of an old-time gospel choir.  Can I get an Amen?  This one is pretty damn close to being my favorite song on the album.

With vocals reminiscent more of Jimi Hendrix, Vivito takes on Johnny Winter’s “Fast Live Rider” with unbridled ferocity.  Guiding this track is Justin Guip, who lays down a driving head-bobbing rhythm on the snare. Another Seventies inspired cover they perform is Traffic’s classic, “Light Up or Leave Me Alone”.  This one gets kind of funky, and Vivito’s vocals on this one remind me of Danny Hutton from Three Dog Night.  Vivito and company also hit a homerun on their cover of the Band’s “Shape I’m In”.  Louis nails the keyboards, giving it a soulful groove.  I believe this is what the song may have sounded like if it were originally recorded at Stax studios in Memphis, TN. The way Catherine Russell delivers the vocals on Sugar Pie Desanto’s “Soulful Dress” is sexy and soulful.  Her lead vocals on “Fools Gold” is just as sweet.

“Song for Levon”, is a poignant tribute to the late Levon Helm, who passed away earlier in 2012, the same year this was recorded.  Vivino, playing piano and singing in a style reminiscent of Randy Newman, recalls his memories of the good times he shared with his good friend.  I feel my heartstrings being tugged on and I well up a little with emotion with each listen.  I love the last line, ‘It’s not what you take with you, it’s what you leave behind’.  That’s so true, and such an inspirational thing to sing.

13 Live, this thirteen track recording, is outstanding and I wish I could have been in Woodstock to experience it in person.

Posted by PhillyCheezeBlues at 3:16 PM