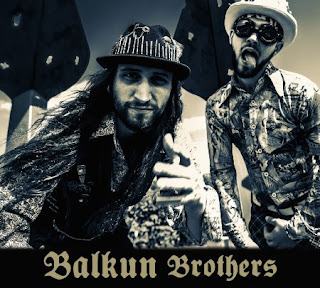 From the get-go, the Balkun Brothers hit the ground running full speed with “Been Drivin’”, serving hard-nosed blues with a heart-racing delivery. This song gets the adrenalin flowing like the Mississippi.  They keep that energy going in “I Know What Ya’ Did”, and “She Got it All”, both full of catchy riffs and swampy slide guitar.  I get totally swept away in “Control Yourself”, and love the Zeppelin-esque vibe present in “Cold Heart”.  The only cover song on the album, Johnny Winter’s “Mean Town Blues” is a sheer delight.  Steve keeps it rolling on guitar as Nick keeps it tumbling with a cool hypnotic beat.  The album closes with the sweetly performed, acoustic selection “Rainy Day Front Porch Blues”.  Background audio of passing cars on a wet street add a nice touch of authenticity.
This fantastic album from the Balkun Brothers is brilliantly penned and has everything going for it.  It is destined to be one of this year’s favorites.

Posted by PhillyCheezeBlues at 2:29 PM No comments: 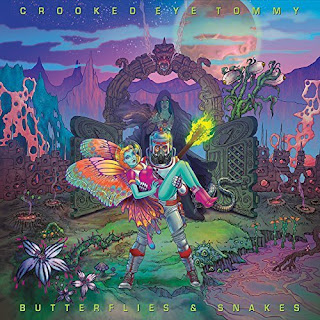 “Time Will Tell” is soulful blues with stellar guitar riffs and tasty B-3 accompaniment from Calire.  This leads into another favorite, “Tide Pool”, an outstanding track I could listen to all day.  It’s mellow and floaty essence feels so good to the ears.  The funk is let loose on “Love Divine”, as they tear it up on guitar and vox.  This one sounds really good.  Love ballad “Over and Over” is beautifully performed.  Calire breaks out the heat on saxophone and when background singer Becca Fuchs steps to the mic, it gets even hotter.

Crooked Eye Tommy delivers a solid album of blues with a dabble of this and that thrown in for good measure.  In addition to the really interesting music on Butterflies & Snakes, the cover art by Mike Lemos stands out as a definitely favorite as well.

Posted by PhillyCheezeBlues at 8:15 PM No comments: 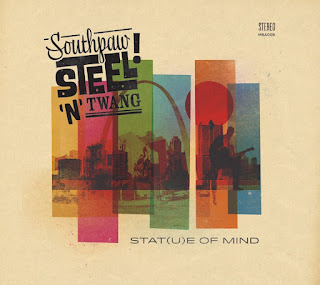 Stat(u)e of Mind , Southpaw Steel ‘n’ Twang’s fourteen track follow-up to their Hales Pleasure Railway album, sports even more innovative instrumentals than its predecessor.  I love the way their music takes a step off the beaten path to dissipate the boundary between Bluegrass and Jazz.  This innovative trio from Helsinki, Finland consists of guitarist Ville “Lefty” Leppänen (Micke Bjorklof & Blue Strip), drummer Tero Mikkonen, and bassist JP Mönkkönen.  In September 2015, the band recorded Stat(u)e of Mind at Firebrand Recording Studio in St. Louis, Missouri, after accepting an invitation to perform at the 2015 International Steel Guitar Convention.

Mikkonen beautifully performs the opening song, “Gateway”, on ukulele.  Clocking in at just a smidge over a minute in length, this Hawaiian flavored appetizer makes for a lovely intro for the rest of the album.  Leppänen breaks out some fantastic swampy guitar licks on “Aloha Garage”.  This is one of my absolute favorites.  “Route 68” has a cool jazzy character.  Mikkonen and Mönkkönen keep the rhythm hip as Leppänen lets loose with an outstanding avant-garde performance.  Leppänen sets a melancholy mood for the lovely “Almost Too Beautiful” before taking me by surprise with “Duel”.  Without words, this instrumental is still able to tell a story.  The listener is marched in to this Latin infused masterpiece with a flurry of spaghetti-western/surf guitar.  The song takes an unexpected and marvelous turn the moment the horns pop.  This is such a killer track.  I like to think of the closing song, “Sergio” as a fantastic tribute and homage to legendary film director Sergio Leone and the man who scored the lion’s share of his films, composer Ennio Morricone.  The Morricone influence certainly shows.


It's really fresh to hear a band like Southpaw Steel ‘n’ Twang share their unique brand of music and captivating compositions.  Stat(u)e of Mind is abundantly full of character and a delightful listen.


Posted by PhillyCheezeBlues at 2:34 PM No comments: 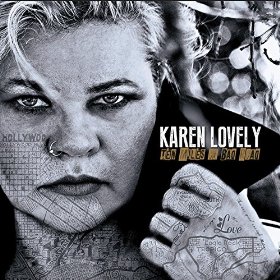 Ten Miles of Bad Road , the fourth album from Portlander Karen Lovely, boasts thirteen magnificently performed original songs.  Her extraordinary vocals are beautiful and lush as she delivers the blues in her own unique style.  For this recording, Lovely is backed by a five-star list of LA studio musicians, of which include guitarists Johnny Lee Schell and Alan Mirikitani, pianist/organist Jim Pugh, bassist James “Hutch” Hutchinson, and drummer Tony Braunagel.

I absolutely love “Company Graveyard” with its ominous bassline and anti-establishment lyrics.  Lovely’s commanding vocals ring out with power and clarity, which make me immediately think of the Pretender’s Chrissie Hynde.  “Better Place” is another big favorite.  Schell plays this one nice and swampy.  “I Want to Love You” is such a beautiful love song.  Lovely’s angelic vocals softly flow as Pugh eloquently backs her up on piano.  I really like the rootsy vibe to Lovely’s performance on “Low Road”.  Mirikitani, guitar in hand, serves up a bit of Texas-style blues on this song while Pugh stirs a little funk into the mix with his B3.

One listen to Ten Miles of Bad Road, is all it takes to conclude that Karen Lovely is way ahead of the curve when it comes to vocal artistry and songwriting.  This album is definitely one that should be heard.

Posted by PhillyCheezeBlues at 2:28 PM No comments: 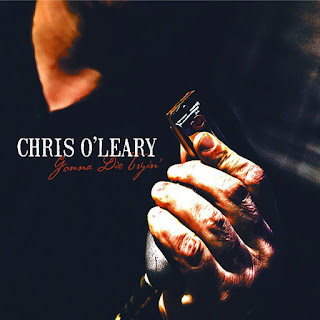 One of the things I admire about O’Leary is the fact that he seems to puts as much thought into his lyrics as he does his music.  When his music takes that slight turn to the dark side, and he just lets loose on that voice of his, I’m immediately reminded of music fave, Tom Waits.  I love Vitarello’s tangy blues riffs and Bruce Katz’s barrelhouse piano on the lead track, “Can’t Help Yourself”.  O’Leary’s badass gravelly vocals and stellar harp playing lead the way on title track “Gonna Die Tryin’”, a killer track with a hell of a lot of soul.  Vitarello’s suave and tasty guitar licks are greeted by Katz’s groovy keyboard finesse on this one.  I dig the horns and funky rhythm on “Hook Line and Sinker”.  This tune seemingly pays homage to that sweet Memphis soul music which came out of Stax Records in the Sixties. The track is very nice indeed.

I’m pretty much knocked out by this album.  It’s surely one of my favorite releases this year.

Posted by PhillyCheezeBlues at 5:02 PM No comments: 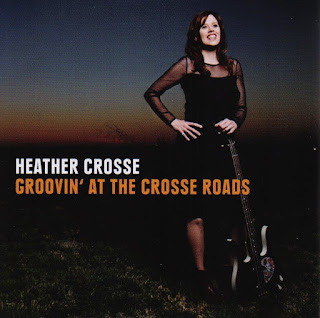 Groovin’ at the Crosse Roads

There’s always been some damn good music pouring out of the Mississippi Delta, and the spigot is far from being turned off.  Caught in that wave of music is Heather Crosse‘s magnificently bodacious rocking blues band, Heavy Suga’ & the Sweetones.  Formed in Hot Springs, Arkansas in 2007, Crosse moved the band to Clarksdale, Mississippi in 2008.  Groovin’ at the Crosse Roads is eleven tracks of boogie-laced blues produced by non-other than multi-Grammy Award winner Jim Gaines.  With Crosse taking on lead vox and bass in the band, she is joined by guitarist Dan Smith, drummer Lee Williams, and Mark Yacovone on piano/keys.

Crosse hooks me quick with her sultry performance of “My Man Called Me”.  Smith’s guitar licks and Yacovone’s piano prowess solidifies this intoxicating mix of swing and electric blues. I love their funky cover of Clarence “Blowfly” Reid’s 1974 sexy B-side “Rockin’ Chair”.  Slathered in a laid-back Seventies vibe, this wonderful throwback conjures up visions of big collars and flare jeans.  Crosse adds just the right amount of rasp as she takes on Big Mama Thornton’s powerful classic “You Don’t Move Me No More”.  Not only does Crosse nail the vocals, but Yacovone’s piano performance shines brightly, reminding me a bit of the “Killer”, Jerry Lee Lewis.  This one is fun indeed.

Simply put, Groovin’ at the Crosse Roads is a delightful listen.

Posted by PhillyCheezeBlues at 7:17 PM No comments:

Ebony Jo-Ann - Please Save Your Love For Me 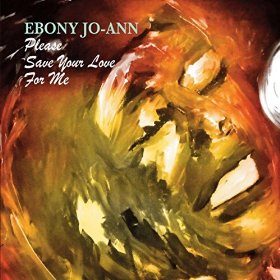 As I listen to the debut album, Please Save Your Love For Me, from Ebony Jo-Ann, I wonder why this phenomenal singer is just now coming into my awareness.  Whatever the reason, I’m so glad this album journeyed my way.  Produced by Danny Kean, who Ebony Jo-Ann first crossed paths with at Ashford & Simpson’s Sugar Bar in New York City, the album delicately delivers some of the most soulful blues I’ve heard.

Ashford & Simpson penned song “Just Rain” begins the music journey with nightclub blues at its best.  The sassy vocal stylings of Ms. Jo-Ann and bluesy guitar licks from Mark Bowers sound so sweet against the stellar horn section.  The Percy Mayfield classic “Send Someone to Love”, is a beautiful piece.  Kean pours a ton of soul into his piano performance as he also joins Ms. Jo-Ann on vocals, making this timeless classic a hip and cool duet.  Another favorite, “Burning World”, preaches enlightenment and empowerment to save our burning world.  Ms. Jo-Ann’s vocals are smooth and powerful as Bowers delivers a smoking guitar performance.

Ebony Jo-Ann has definitely got it going on with this ten track album, which also boasts splendid covers of blues classics Bumble Bee Slim/Eddie Miller’s “Muddy Water” and Memphis Sheiks’ “Sitting on Top of the World”.  This is about as good as it gets.

For more information on Ebony Jo-Ann, visit her website at:
http://ejkdkd.wix.com/ebony-jo-ann-dot-com

John McKinley - Window on the World 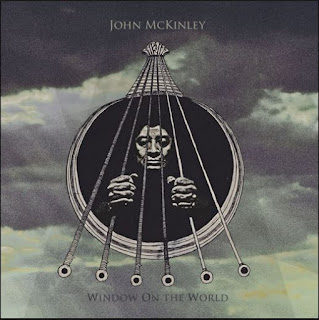 There is some quite amazing music coming from New Mexico guitarist John McKinley on his debut release, Window on the World.  This twelve track album consists of all original songs laced with Texas blues, Prog-Rock, Jazz, and Latin music.  Joining McKinley is his son, bassist Darius McKinley, and drummer Ben Rollo.

“Dirty Nails” rocks the Blues with down and dirty, smoking hot guitar licks. This instrumental, clocking in at less than two and a half minutes packs a hell of a lot of punch.  I’d love to hear an extended version of it.  McKinley kills it on the psychedelic power-punch “Stratitude”.  This is an absolute mind-melting instrumental with a bass-line reminiscent of the one on Frank Zappa’s “Muffin Man”.    I absolutely love the spirit-lifting Latin sounds of “Cuando Yo Me Voy (I’m Outta Here)”.  Rollo’s intoxicating beats and Darius’ funky rhythm on this stellar track immediately puts me in a dancing mood.  McKinley, again shows how deep his talents run on beautifully played “Ontarion Song” which transcends from New Age to swampy blues in an unexpected blink of an eye.  This one is perfectly played.

The music on Window on the World is exceptional and most interesting, and I am definitely going to keep my eyes and ears open for new offerings from John McKinley's band.


For more information on the John McKinley band, visit his website at http://johnmckinleyband.com/

Posted by PhillyCheezeBlues at 1:16 PM No comments:

Brass Transit Authority played to a full house at the Longbranch in Cedar Rapids, Iowa on New Years Eve, making it one of the hottest spots in town to spend the evening.  Known for their spot on covers from bands such as Chicago, Blood Sweat & Tears, and Van Morrison, BTA brought their "A-Game" and rocked the house. 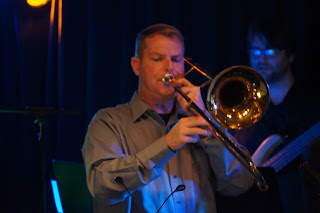 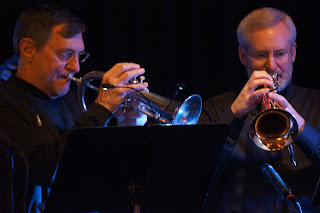 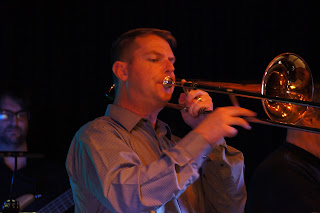 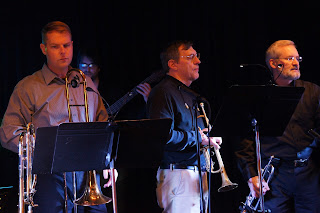 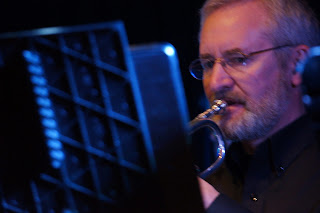 Posted by PhillyCheezeBlues at 11:12 PM No comments: