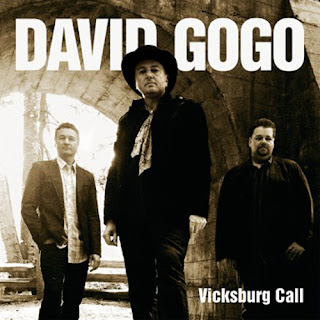 “Cuts Me to the Bone” is hard rockin’ Texas style blues that pulls me right in to his world. With an intro that pays homage to Neil Young, and a rhythm that fits really comfortable, the song screams to be turned up loud.  I also have to mention “What’s Not to Like” which boasts one hell of a catchy hook.  I like the frugally peppering of slide guitar on this one. The legendary Kim Simmonds (Savoy Brown), guitar in hand, joins in for “Fooling Myself”.  This one is one big bowl of blues.

I love his spacy psychedelic take on Neil Young’s “The Loner” with the cool as hell bass line from Stevens.  Gogo’s slathering of raw and fuzzy goodness on his guitar riffs grabs my attention as the song melts in my ears. A big surge of empathy erupts as Gogo distraughtly sings “There’s a Hole”, about the hole in his life that his woman used to fill. The finishing touches of harmonica from special guest Shawn Hall pull the heartstrings even tighter.  Gogo masterfully tackles Stephen Stills’ “Jet Set (Sigh)” too.  His guitar performance on this track is phenomenal.  The unexpected treat on this album appears on the final track.  Gogo beautifully puts his unique spin on Annie Lennox’s “Why”, singing it with fortitude of conviction.

Posted by PhillyCheezeBlues at 12:57 PM No comments:

Andrè Bisson - Left With the Blues 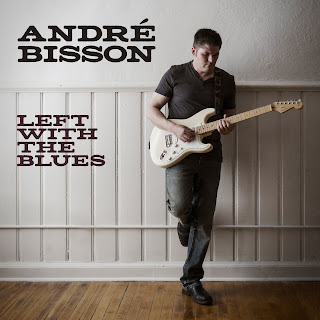 There’s something magical about the multi-talented Andrè Bisson and his latest release, Left With the Blues. The band, made up of vocalist/guitarist/pianist Bisson, saxophonist Bill Holinaty, trumpeter Loretta Hale, bassist Kevin Beeby, and drummer Glenn Paul, is one extremely tight group of musicians with a keen flair for blending blues with soul, funk, and gospel.  Bisson’s songwriting talent shines on this magnificent album.

Bisson’s vocals drip with emotion as he sings the title track, “Left with the Blues”.   He reminds me so much of Chris Robinson (Black Crowes) on this one.  This slow heartfelt song sounds spectacular accented with the horns.  Bisson gives a flawless performance on his cover of Tommy McClennan’s beloved blues standard “Crosscut Saw”.  It’s a treat to hear the very talented blues harp player Jerome Godboo sit in on “Deepest Kind of Mean”.   When I hear him play, it leaves no doubt why he won Best Harmonica Player at the International Blues Challenge in 2014.  This bluesy melodious treat is indeed a favorite.

Left With the Blues closes with “Brand New Day”, a joyous and spirited song fit for a revival.  This one has such a big and full sound, it brings a smile to my face.  The entire album is an outstanding listen.

Posted by PhillyCheezeBlues at 10:50 AM No comments: 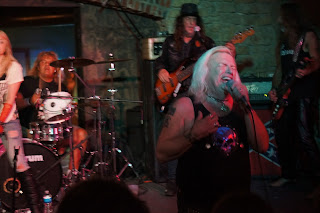 Electricity came to Dubuque, Iowa last night in the semblance of Black Oak Arkansas. Founding members, front man Jim “Dandy” Mangrum and guitarist Rickie Lee Reynolds joined by fellow band mates, drummer Johnnie Bolin, guitarist Arthur Pearson, bassist George Hughen, and backing vocalist Samantha Barnes, played their asses off in harum-scarum fashion to a crowd of dedicated fans who continue to keep the faith.  The venue, Eronel, is located in the basement of the historic Cooper Wagon Works Building.  Originally constructed in 1895, its stone walls and arched passage ways reminded me a little bit of images I’ve seen of the Cavern Club in Liverpool.  This made for a very cool intimate setting for the show.

When Jim Dandy took the stage, donning his signature black leather, patch-adorned vest atop a cool as hell black tank with a silver skull emblazed on the front, there was no doubt this was going to be a fantastic show.  I could feel the energy heighten as BOA broke into “Plugged in and Wired” off their newer album, Back Thar N’ Over Yonder. This one really got the adrenalin flowing.  It was so good to hear “Hot Rod”, a favorite filled with double entendres and peppered with Jim’s maniacal laughter.  I also grinned from ear to ear as they played old favorites, “Uncle Elijah”, “High ‘n’ Dry”, “Happy Hooker” and “Hot and Nasty”.  The later in which Jim Dandy pulled out the washboard.  But when they played “Lord Have Mercy on My Soul (Halls of Karma)”, chills shot down my spine.  It is a phenomenal song and was a definite crowd pleaser.

Prior to performing “Heartbreaker”, Jim spoke a few touching words about a certain ‘spitfire redhead’ who died 20 years ago and sang this one in honor of Miss Ruby Starr. The band also paid tribute to Johnnie Bolin’s brother Tommy Bolin with a beautifully played “Post Toastee”.

Saving “Jim Dandy” for last was pretty much a given.  Most everyone was singing along as the show sadly came to a close. Every time I see this band, I feel lifted and energized.  They surely are a band I will try to catch live every time I get a chance.
* All Photos by Phillip Smith

Posted by PhillyCheezeBlues at 2:14 PM No comments: 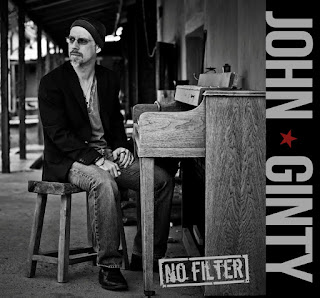 Not only is John Ginty an amazing keyboardist, he surrounds himself with amazing talent and continues to release the most outstanding music I’ve heard.  Ginty returns to Showplace Studios in Dover, NJ with guitarist Mike Buckman, bass player Paul Kuzik, and drummers, Dan Fadel and Andrei Koribanics to record his latest masterpiece of all original songs, No Filter.

The album begins and ends with the funky and very soulful “Fredo”, taking its name from the character Frederico "Fredo" Corleone from Mario Puzo’s Godfather.  The first time we hear the song, it is an instrumental, but when we hear the remix at the end, it takes on a whole new personality.  The one and only Redman throws down rhymes of his own mastery infusing a hip-hop vibe into this wonderful track about backstabbers and losers.

“Old Shoes”, featuring the magnificent contralto voice of Alexis P. Suter and swampy guitar from Jimmy Bennett, is wonderfully bluesy.  Suter belts this song out with attitude and conviction.  Cara Kelly takes the mic on the colossal R&B track “Battlegrounds”.  Ginty tosses everything he’s got into his performance, bombarding the soul on every level.  While on the topic of ‘soul’, Ginty commandeers the bus and drives us to his chapel for a “Rock ‘n Roll Sunday”.  I love the sound of the B3 on this poppy and spirited track sung by Paul Gerdts.  Now this is my kind of church music.  Amen!


Posted by PhillyCheezeBlues at 12:37 PM No comments: 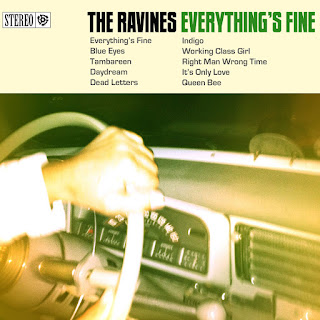 The first of the ten songs to greet the listener is title track “Everything’s Fine”, and what a great way to be greeted.   Corney dishes out no-nonsense rock with a catchy melody in this love song for slackers in a fashion reminiscent of Nick Lowe or The Bodeans.  “Daydream” rolls out like a new-wave pop song from the Eighties. Complete with the obligatory hand claps that made its way onto many a record of the day; this would have been a perfect addition to the soundtrack for John Hughes’ The Breakfast Club.

“Indigo” takes a direction of its own, to a slightly darker place. So very much reminiscent of the music of REM before they broke, this song is so rich and full of texture.  It’s certainly a favorite.  The Ravines save the lovely “Queen Bee” to bid farewell to the listener. This one is beautifully written and celestially performed.

Everything’s Fine has unique sense of unexpected familiarity that presents itself upon the first listen. Although the music is fresh and new, when I hear this album, I feel like I am listening to an old favorite.

for more info on the Ravines, visit their website : http://www.theravines.co.uk/
Posted by PhillyCheezeBlues at 11:44 AM No comments: 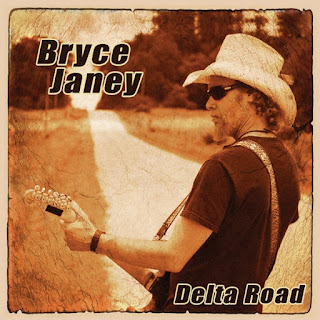 I’m engrossed with the latest album from Bryce Janey, Delta Road.  This outstanding collection of bodacious guitar blues is jam-packed with exceptional songs and great musicianship.  Bassist Dan Johnson and drummer Eric Douglas both return to back Janey once again in the studio, keeping that signature sound intact.

Right from the beginning, Janey delivers the goods. “Keep Marchin’ On” takes the listener on a musical journey.  A funky rhythm and a dab of psychedelic undertones enhance the phenomenal guitar jams he lays down.  This track is surely at the top of my list of favorites. While singing about the strong kinship between himself and his instrument, Janey lays down a catchy smooth bluesy groove in “This Old Guitar”.  This is a great platform to launch some really nice, attention-grabbing guitar licks.

Don’t let the song title “Same Old Thing” fool you.  The song is anything but that.  Once the ignition key is turned, the funk is released and Janey steers the song skyward.  The sound he conjures out of his guitar is simply amazing.  Janey digs in deep with lots of tasty slide on title track, “Delta Road”, a rich and swampy homage to The King of the Delta Blues, Robert Johnson.  I love the harmonica bursts provided by Peter Welsh.  While on the subject of Robert Johnson, I have to mention the stripped-down rendition of Johnson’s classic tune, “Hellhound on My Trail” which Janey closes the album with. This one is clearly remarkable.

Delta Road keeps the groove moving from beginning to end, and in my humble opinion is Bryce Janey’s best work yet.
Posted by PhillyCheezeBlues at 4:20 PM No comments: